Aquarium Fish?
The Harlequin Rasbora is suited for an aquarium. They are some of the few fish that can be suited to smaller fish tanks.
Since they are small, they are also part of the distinct group that can do well in the planted tanks.

Pond Fish?
In the wild, this fish does exist in lakes, hence in theory should do well in ponds. However, it would be a waste for the aquarium enthusiast because this fish is a beautiful fish, best to be admired from its side view.

Also, you might not be able to put other fish in that pond, since being so small, the Harlequin Barb or Rasbora will certainly disappear when mixed with larger fish.

Fish Farming Potential?
Too small to be any significant food fish and also not numerous enough to be eaten like say anchovies.

It is however a reasonable species for the aquarium pet fish trade contributing not a small amount of side income to locals.

Predator?
This fish is too tiny to be a predator like something out of the TV Show River Monsters. However, as most fish, it is an omnivore.

Food Eaten?
As mentioned, they are omnivores and feed on insects, larvae and worms in the wild. They will readily eat tiny pellets as well. They are as comfortable darting to the surface to grab a morsel or dart about at lightning speed almost, amongst themselves, trying to get at the falling pellets.

Aquarium Fish Disease?
No particular disease seems to be prevalent in the Harlequin Rasbora. At least none that are visible. Do make sure you feed them well and take care of the water quality and you should be good to go.

Money Value?
These fish are pretty cheap, when small and even when adults.
Having said that, they are truly beautiful fish and really quite cheap to take care of too, since their food is so tiny (I dont think a small bottle will ever run out!).

The diamond blue on the back and the translucent shiny colors makes them a nice fish to look at and nicer still when you have a group of them floating about. Probably a good starter fish for you newbies! (and I am serious, you can stare at them for a long time too). 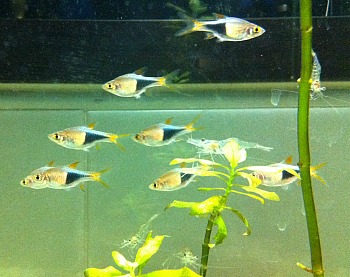 Aquarium Fish Compatibility?
The Harlequin Rasbora are generally compatible with fish of the same size. They are ideal community tropical fish and are commonly mixed with Neon Tetras for e.g. although they are from totally different geographical regions!

The Harlequin Rasbora is thet type of fish that has that edginess that makes them dart about as opposed to swim with a smooth flow. Kinda cute and not harmful at all :)

'Setem' - pronounced as 'Se' as in the English term 'Sir' and 'tem' as in the word 'temp' without the 'p'. Essentially, it is the same as the Malay Word for a Postage Stamp (perhaps it looks like one!).

Little known fact?
This fish originates from South East Asia. In fact, they are an important Aquarium fish in the Ramsar Site 'Tasik Bera' in the State of Pahang in Malaysia.

It is a true wonder why the Harlequin Rasbora was not spread throughout the country (and really the region) to help battle the mosquito menace (by eating the larva).

Instead, mosquito fish from the west were imported and although they do serve this mosquito larvae eradication purpose, they are indeed an invasive species and does surely cause some sort of ecological imbalance.

Seeing that the Harlequin Rasbora is now rare in the region, it would have made more sense to use the Harlequins!